End of June 2015, a right wing government came to power in Denmark. Severe cuts backs on development aid were imposed immediately in view of the financial burden of the refugee crisis. The annual call for application to the DANIDAs grant facility for development research was postponed until November 2015 and then cancelled altogether.

Almost one year of anxiety followed. The research community was concerned whether DANIDA funding for development research would continue at all. However, when the Draft National Budget for 2017 was released in August 2016, the revival was confirmed. When passed in Parliament, the National Budget 2017 included a DKK 140 million allocation for development research. DKK 90 million was set aside for the research capacity building program Building Stronger Universities in Developing Countries, Phase 3, over a four year period. Also, a new program Danida Market Development Partnerships was launched with a pilot phase budget of DKK 40 million allowing private and non-private partners to pursue a commercial project with inputs from one or more knowledge institutions.

Changes were also in store for the existing programmes. When the new government took office, the Prime Minister Lars Løkke Rasmussen of the Liberal Party appointed the Danish Ambassador to India, Mr. Peter Taksøe-Jensen, to review Danish foreign policy at large and recommend priorities. The resulting report published in May 2016 advocated a key principle that Danish foreign policy should target the promotion of Danish interests and draw upon those sectors where Denmark holds strong competences. This principle was carried over in the aid strategy The World 2030 – Denmark’s strategy for development cooperation and humanitarian action. During 2016 DANIDA organized a public hearing about a draft version, as well as a nationwide tour with the Minister of Foreign Affairs. The strategy was passed by a broad majority in Parliament in January 2017.

The first comprehensive DANIDA research strategy was launched back in April 2014 under the former government following an extensive hearing process among a wide range of stakeholders. Clearly, the change of government questions the validity of this effort.

On September 8, 2016, the Association of Development Researchers in Denmark (FAU) called the research community for an afternoon seminar entitled DANIDA’s research grants: Direction, role and framework? at the University of Copenhagen campus of Life Sciences in Frederiksberg. A sure crowd puller, more than 50 participants turned up for the discussion on priorities and modalities of the DANIDA research grants.

1. Joint research projects up to DKK 10 million each, with South university partners in Ghana and Tanzania (total DKK 75 million)

Also, a third and final phase of the BSU program will be funded for a four year period; a more clear focus is to be adopted in this phase

The scholarship program will continue. However, the emphasis will shift from short courses to long term study stays in cooperation with Danish educational institutions.

For the research grants, DANIDA organised information meetings in Denmark and Tanzania and Ghana. Both in Accra, Ghana, and in Dar es Salaam, Tanzania, these meetings attracted hundreds of potential applicants, only to be informed that the 2017 Call would on the average make available not more than 3-4 research grants in each country.

During the FAU seminar, the chairman of the Consultative Research Committee for Development Research (FFU), Professor Flemming Konradsen, University of Copenhagen, revealed that the Call text is not decided by the FFU.

The modest funding was a point of departure in the presentation by professor Preben Kaarsholm, Roskilde University. Representing the research community and with an extensive record in studies on cultural encounters, gender, colonial history, nationalism, religion and violence, Kaarsholm suggested to slice the total funds into a number of smaller, experimental research projects. Such initiative would facilitate the inclusion of a wider range of the Danish resource base, both in terms of competence in development research and with regard to partners and investors in civil society and in the private sector. 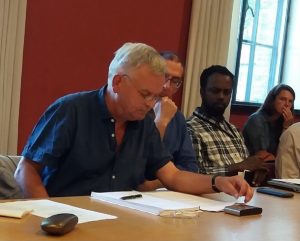 In South partner countries, a similar approach is needed. It is important to work with private universities, non-governmental organisations and private companies, who actively request research, and with university departments, who promote a critical, autonomous and democratic academic culture. Earlier, research proposals on conflict dynamics have been rejected during national screening in South partner countries.

Currently, applications for research grants are assessed by three sets of criteria: quality of research; relevance for development; and potential for research capacity building. The criteria are so complex that an element of random is introduced. Kaarsholm wants to return back FFU to its original role as a research council looking for quality of research only. The two other sets of criteria could then be applied in a parallel process by the DANIDA evaluation department, who should give up their seat in FFU. The process would resemble that of the earlier ENRECA program, simplify the application process and make it more transparent. In his view, FFU would become less headstrong in its selection of projects, and the research objectives would be simpler, less burdensome to fulfil, and have a better chance for success.

In conclusion, Preben Kaarsholm stressed that several smaller, experimental research projects are needed to try out new partnerships and modalities. And fully transparent procedures should be applied to such a range of innovative and risk-taking projects.

The participants broke into a vivid discussion. Basically, there was support for Kaarsholm’s main points. However, the audience was less enthusiastic about the suggestion that research are separated from research capacity development altogether. The larger, long term research projects, which include a component of research capacity development, need to go beyond the currently stipulated 5 years of duration. Following the seminar, FAU forwarded the recommendations in an open letter to the Minister for Development Cooperation [2] (in Danish only).

The development research community may not agree on every issue, but a feeling of frustration and even distrust towards DANIDA is commonly shared due to the ‘rollercoaster’ ride of DANIDA’s research policy in recent years. Some may only reluctantly contribute to another hearing process, although a thorough revision of the research strategy from April 2014 is much needed.

[1] FFU is a programme committee under the Innovation Fund Denmark which advises the Minister for Development Cooperation regarding research applications under the competitive funds.

print
We use cookies on our website to give you the most relevant experience by remembering your preferences and repeat visits. By clicking “Accept All”, you consent to the use of ALL the cookies. However, you may visit "Cookie Settings" to provide a controlled consent.
Cookie SettingsAccept All
Manage consent

This website uses cookies to improve your experience while you navigate through the website. Out of these, the cookies that are categorized as necessary are stored on your browser as they are essential for the working of basic functionalities of the website. We also use third-party cookies that help us analyze and understand how you use this website. These cookies will be stored in your browser only with your consent. You also have the option to opt-out of these cookies. But opting out of some of these cookies may affect your browsing experience.
Necessary Always Enabled
Necessary cookies are absolutely essential for the website to function properly. These cookies ensure basic functionalities and security features of the website, anonymously.
Functional
Functional cookies help to perform certain functionalities like sharing the content of the website on social media platforms, collect feedbacks, and other third-party features.
Performance
Performance cookies are used to understand and analyze the key performance indexes of the website which helps in delivering a better user experience for the visitors.
Analytics
Analytical cookies are used to understand how visitors interact with the website. These cookies help provide information on metrics the number of visitors, bounce rate, traffic source, etc.
Advertisement
Advertisement cookies are used to provide visitors with relevant ads and marketing campaigns. These cookies track visitors across websites and collect information to provide customized ads.
Others
Other uncategorized cookies are those that are being analyzed and have not been classified into a category as yet.
SAVE & ACCEPT